About the Time I Posed Nude for Fine Artist Bernard Perlin 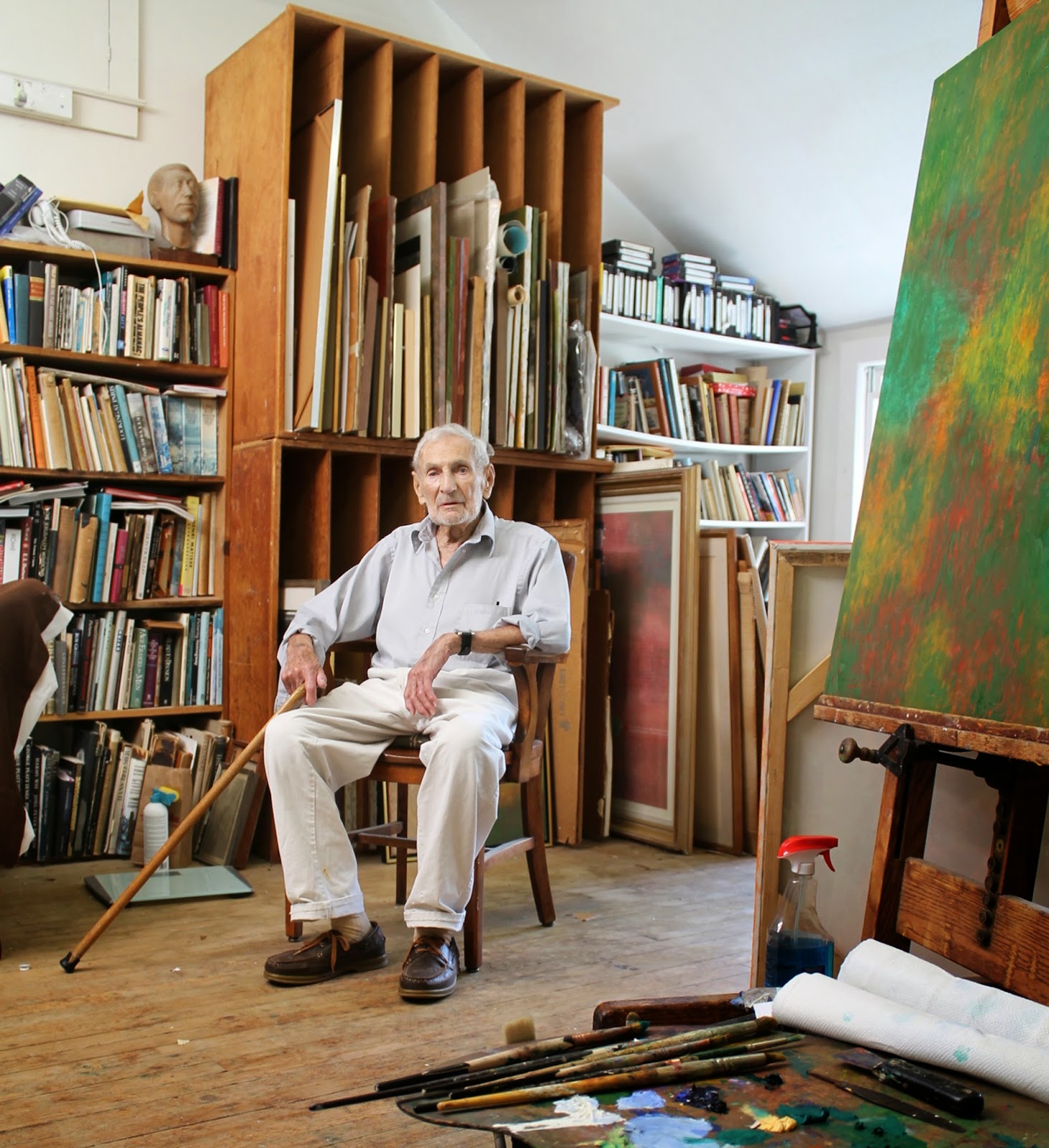 Three years ago today, after buying one of Bernard Perlin's early silverpoint nudes on Ebay, The Mister innocently wrote a letter to the artist. As he is wont to do, The Mister wanted to know more about the model and the story behind the piece and, after digging up Bernard's home address, reached out with an admiring letter. Little did The Mister know that that letter would lead to a three year relationship that would evolved into daily phone calls and multiple visits. And, of course, I had no idea that I would find myself standing buck naked in Bernard’s light-filled studio, having the likeness of my behind committed to canvas.


It was just last July that The Mister and I drove from Chicago to Connecticut to spend a week with a then 94-year-old Bernard Perlin. The Mister knew Bernard’s charming old cottage in Connecticut very well. Shortly after that first letter, he made his first trip out to visit Bernard in person. Their friendship was instant. After one night in a hotel, Bernard insisted that The Mister pack his bags and come stay with him in his house. The older man reveled in telling his stories to the eager student. And in turn The Mister lived vicariously through the seasoned eyes of an artist in his twilight. 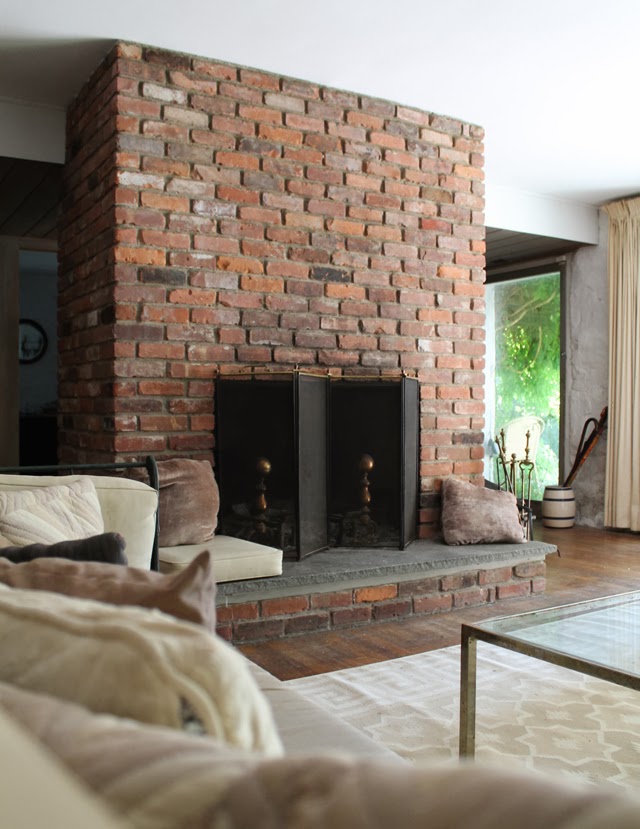 By the time we made the trip to visit Bernard over the week in early July, The Mister had visited him many, many times. I, on the other hand, had only been to his home once. The previous Christmas, when I was in New York for a work function, The Mister met me in Manhattan and we traveled out to Connecticut together so that I could finally meet Bernard in person. The Mister was to stay for a long weekend in an effort to continue collecting Bernard's story but I was only able to stay for the evening.

Apparently in the short time I was there, I made an indelible impression. Or, more to the point, my legs and ass made an impression. It had been quite cold on that December evening and, after showering, I pulled on my long johns and stretched out on the hearth and warmed myself by the crackling fire. Bernard frequently mentioned that scene to the The Mister in conversations.

In advance of my return visit in July, Bernard mentioned to The Mister that he had found an abandoned canvas in his studio. As he looked at the canvas, which he had covered in lush greens and golds and reds, he said that he saw my backside. When The Mister relayed to me that Bernard wondered if I would pose for him during our visit, I didn't hesitate in saying yes. How could I turn down such an honor?

And there was plenty of reason to feel honored by this request. I mean, there’s vanity, of course. It’s nice to think that my behind might inspire great art! Beyond that, there’s my respect for Bernard Perlin, the man. Since his first visit with Bernard, and through countless phone calls, letters and long weekends, The Mister had been collecting the amazing story of this seasoned artist. As I listened to these stories, and as The Mister recounted his visits with Bernard, I recognized that, as well as being a talented and lauded artist, he was a kind, loving and supportive man.

In addition, Bernard lived his entire long life as an openly gay man. That's over 80 years, some of them not so kind to homosexuals, lived honestly and with integrity. This, in and of itself, earned my utmost respect and admiration. As a homosexual myself, one who has lived just twenty years out of the closet, and one who has seen the remarkable progress in gay rights in that short time, I recognize how much there it to honor in Bernard’s 80 years of gay history. Would I be willing to pose for him? Hell yes! 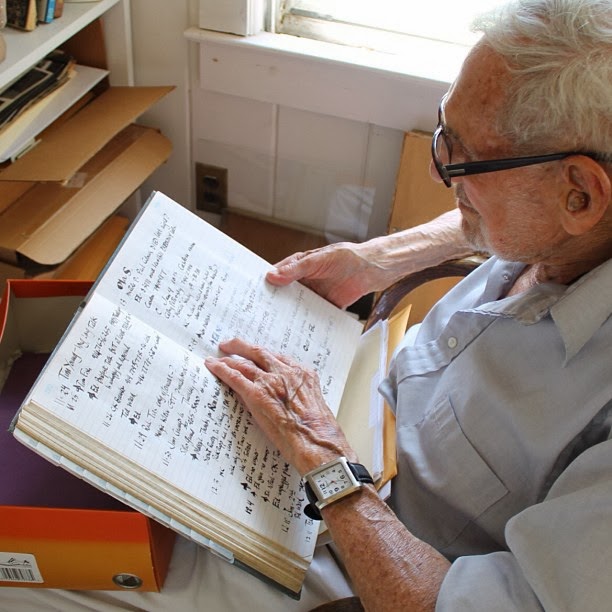 We spent most of our visit in July ensconced in the house, rarely venturing out for anything more than groceries. Bernard had lived in the same house since the 1950’s. When he bought it, he explained to me on our visit, the house was surrounded by apple orchards and open land. The area has filled in considerably since then and yet the sense of privacy and openness surrounding Bernard's house has been preserved.

The structure had originally been a carriage house for a large estate. The second floor was already built out as an apartment and Bernard converted the stables on the first floor into a home, complete with the large brick hearth where I warmed my "inspiring" legs and backside last winter. Over the years the house has seen the addition of a pool, a couple of fires that required extensive re-building and many other changes. One thing that was never added, however, was air conditioning.

The week that we visited was particularly hot on the East Coast. And yet the house felt like an oasis. The first floor, which was built into a hill, stayed cool and comfortable. The arbor on the side of the house provided a cool, shaded spot for lazy lunches. We spent most of your days listening to Bernard’s stories and going through stacks of art in his studio. We indulged in red wine over languorous lunches as we watched wild turkeys strut across the back yard. We lounged under the hot summer sun and waded through the pool to cool ourselves. 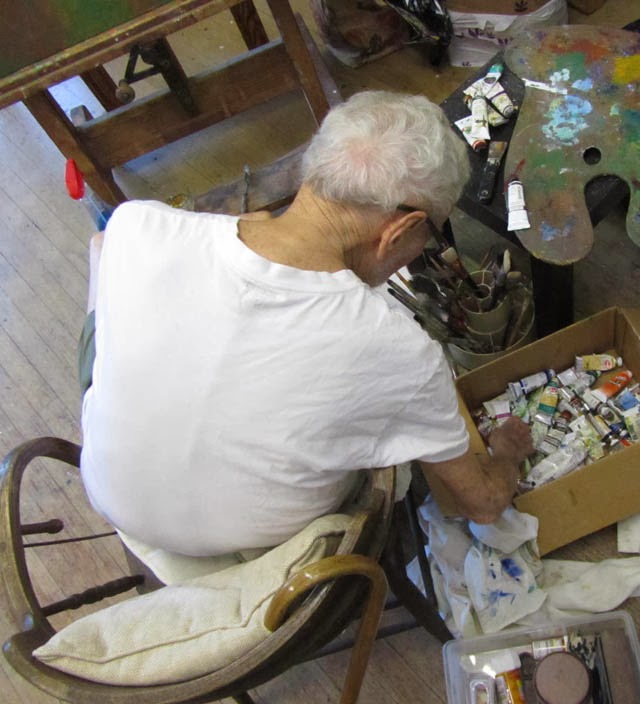 As the sun would set each day, one of us would realize that we had missed the light needed for the portrait. We’ll have to do it tomorrow, we’d say, and then transition into an evening spent laughing over the dinners I prepared. By bedtime, our cheeks were sore from laughter and our heads were spinning from too much scotch.

Finally, on our last full day at the house, we knew it was our only remaining opportunity to fulfill Bernard's wish. Early in the afternoon, we gathered Bernard’s art supplies, set up his easel, fixed a tray of drinks and headed up to the bright studio on the second floor. While the lower part of the house stayed cool even on the hottest of days, the sun drenched studio was like an oven. The heat made stripping off and standing around in my birthday suit feel more like a treat rather than burden! 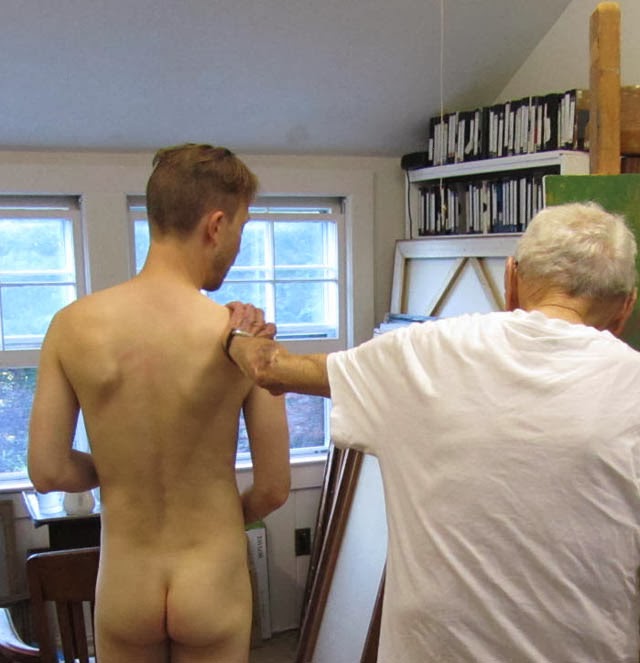 I moved into position under the giant skylight in the ceiling of the studio and told Bernard to pose me as he wanted me. Bernard shuffled over to me, his slippers scraping on the floor with each step, and moved me into position. The Mister put a chair in front of me so I could lean on it if I got tired and set up a table with a book to keep me entertained. I settled in, prepared to stand for hours like a dutiful and respectful model.

Bernard eased his way back to his easel, his palette resting on a small table and his cane slung over the arm of the chair where he sat. Classical music played from the radio on a desk nearby. The Mister stood behind both of us, watching as the painting took form and snapping photos with his camera. With my back to Bernard, I could hear only the scraping of the paintbrush across canvas. I would close my eyes on occasion and try to absorb the moment. I wanted to remember the heat of the room, the sound of the brush on canvas, the smell of the dusty old studio ... I wanted to remember it all.

After just fifteen minutes or so, Bernard asked how I was doing.

Bernard continued painting for a few minutes and then said that I was free to move if I wanted.

"I'm almost done," Bernard replied. "You can go ahead and sit down." 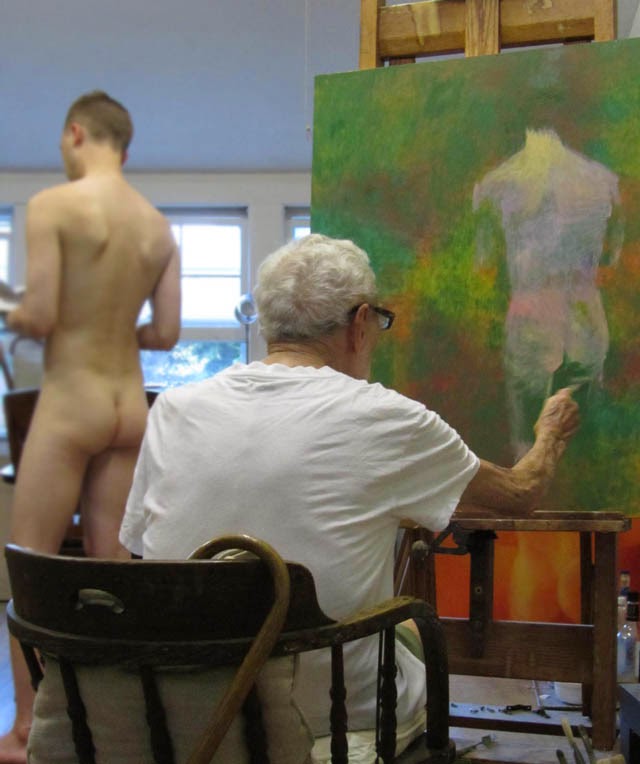 I was so prepared to pose for hours that I was almost disappointed that the painting had gone so quickly. I re-positioned the chair I had been leaning on and sat down. And then, within a few more minutes, Bernard announced that he was finished. I stayed seated with my back to the canvas and heard The Mister gasp as he looked at the finished piece.

"It's beautiful," he said to Bernard.

Before anyone could answer, I stood from the chair and walked around the easel. I'm sure I gasped or yelped or let out some kind of delighted sound when I laid my eyes on the painting. There it was, my backside, committed to canvas. And there was no mistaking it - that was MY backside, beautifully captured by a man I so admired.

I turned to face The Mister and Bernard. Overcome with the emotion of the moment, The Mister started crying. Bernard, on the other hand, had a beatific smile on his face. We stood there for a few moments, silently admiring the painting, reveling in a moment in time that none of us wanted to end.

The Mister broke the silence by explaining his tears. They were tears of joy, he said. As he stood behind observing the process, he had the realization that he was watching an intensely affectionate encounter happening between the two men he loved the most in the world. 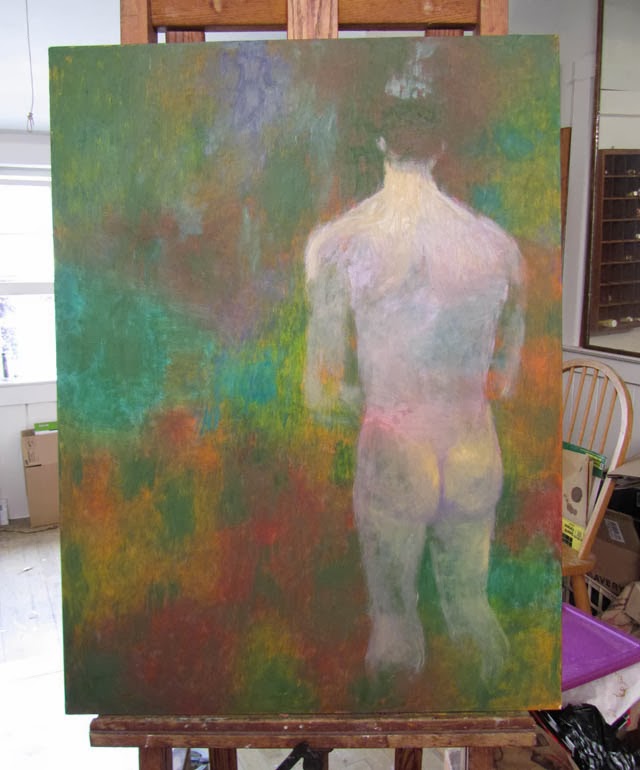 It wasn't until The Mister shared that sentiment that I recognized the intimacy shared between artist and subject. Going into the situation, I rather flippantly thought that it was just a matter of providing the fleshy inspiration for Bernard's painting. And while that's true, it only scratches the surface. Standing there, with my back to the artist, listening to the scratching sounds of Bernard's paintbrush hitting the canvas, I was exposing more than my body. And the artist was capturing more than my physical being. In this moment of intimacy, we were sharing passion. We were sharing souls. We were making love.

When Bernard passed away at the age of 95 on January 14th, The Mister and I spent the evening reflecting on the time we spent with him. Once again, I found myself closing my eyes and recalling that hot summer day in Bernard's studio. And once again I was filled with love.

Thank you for giving me this experience, Bernard Perlin. You will be missed but you will always be in our hearts.

For more information about Bernard and his art, check out BernardPerlin.com.
Read Bernard's obituary from The Ridgefield Press.


Posted by Unknown at 7:22 AM Labels: dapper dreams, dapper travels
Email ThisBlogThis!Share to TwitterShare to FacebookShare to Pinterest