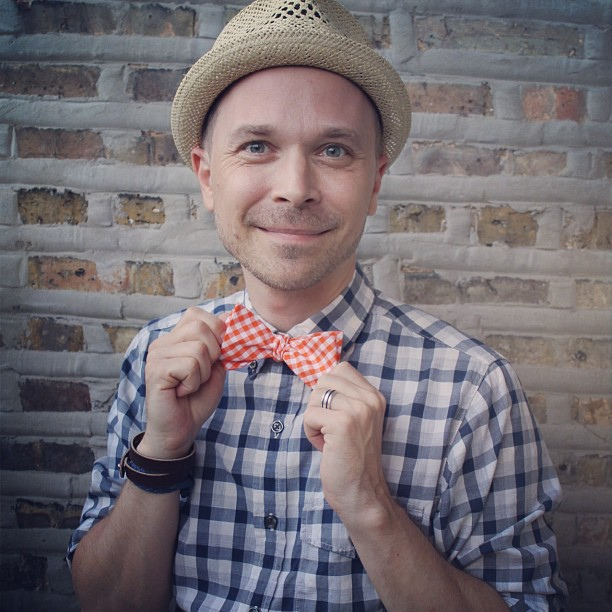 Hello there, dear reader. You must be wondering - exactly how did I become Captain Dapper? Was I sent to Earth in a meticulously decorated space capsule a la Superman to save mankind from ill fitting jeans and ugly living rooms? "Captain Dapper to the rescue!" No, not quite.

Did I graduate with honors from Fashion Police Academy, where I was promoted to Captain by Superintendent Joan Rivers? That sounds so fun! But, sadly, no, that didn't happen either.

In fact, I gave myself the title Captain Dapper. Allow me to explain ...

Ever since I was a young boy in rural Indiana, I've had an eye for fashion and design. With limited resources and a lot of hand-me-downs, I was DIYing before that phrase was even coined. I've also been a writer ever since I learned how to hold a pencil. I remember sitting at the dining table at about six years old, copying the story out of the Clifford the Big Red Dog books and proudly telling my brother that I was writing a book. “You’re copying it,” he told me. “You have to make up your own story to write a book.” From that moment on, I spent my free time making up stories and crafting terrible poetry.

By the time high school rolled around I had amassed a healthy stack of notebooks filled with poetry, short stories and teenage musings on love and loss. So, naturally, when it was time to ship out for college I didn't waste much time in choosing a major. I would study English Literature and then go on to write wildly popular novels and short stories! Ah, the idealism of an 18-year-old.

I went to a relatively small university near Dayton, Ohio, which, after growing up in a town with a population of 900, felt like a metropolis. I quickly outgrew Dayton and moved on to Columbus, Ohio. It, too, felt too small after a couple of years. It was at about that time that a friend announced that she was moving to Chicago and needed a roommate. Sold!

After I moved to Chicago I spent my early 20's the way most people do - impatiently working office and retail jobs and wondering why I wasn't immediately wildly successful as a novelist. I bounced around a bit, retail for a little while, office jobs when I could get them. Still, I kept plugging away in journals, notebooks and, eventually, computers, documenting my life and writing short stories in my free time.

I also spent countless hours refashioning thrift stores clothes, decorating apartments with DIY projects and learning all aspects of the domestic arts. For some reason it never occurred to me that I could turn those talents into employment but then, one lucky summer,  I got the job that changed my life.

After years of struggling in entry level jobs in Chicago, I moved to the tony suburb of Lake Forest, Illinois to become a live-in household manager. For the first time in my life as an employed adult, I felt like I was harnessing all of my skills and talent for a living. I managed a two home estate, which involved everything you would expect. Running errands, cooking meals, working with contractors and planning parties ... my days and nights were spent keeping two high end homes running smoothly. I learned a great deal about high end homekeeping and had my eyes opened to a lifestyle I had never before experienced in my rural, blue collar upbringing.

In my free time, I started making messenger bags. I don't remember how the idea first started but one night I sat down at my sewing machine and whipped out a messenger bag. I referred to the bags and backpacks in my own closet to teach myself about the construction that first time. I gave that first bag away as a birthday gift to a friend. So then I made another and then another, tweaking the designs and creating better and better looking results each time. I started selling my bags to friends and, once I saw that I could make a little scratch from my designs, I jumped on the art and craft show circuit. And Zola Jones Designs handbags and accessories (named after my cat) was born.

After a couple of years managing the estate, I decided to turn my attentions to my handbag line full time. I spent my summers at craft shows while handcrafting the bags in my basement workshop. I picked up some side work creating bags for fabric showrooms and continued to let my line evolved organically. As the business grew, I opened a storefront location in the Ravenswood neighborhood of Chicago. I also started blogging - first, about the bags and then also about my home projects.

Soon, blogging started to take over my life. It also caught the attention of design blog, Apartment Therapy. One of their freelancers referenced one of my DIY projects and it was a hit. It was my first experience with the power of one of the big boy blogs. And I loved it!

I started freelancing for Apartment Therapy soon thereafter. I focused heavily on DIY projects and house tours, while also sharing all the tips I had picked up in my years practicing the domestic arts. Shortly after closing my retail space and ceasing production of my handbag line, I became an editor at Apartment Therapy. I spent about a year as assistant editor and later became shopping editor.

And that brings us to the present. I launched Captain Dapper in early 2013 as a way to cover all of the things that interest me. In addition to home design, I have an eye on menswear and style, travel and food. I've gone back to my roots to explore DIY projects and am treading new ground by focusing on music and events around Chicago.

My mission as Captain Dapper is to spread style, beauty and practical tips while keeping life light and friendly.

- Jason Loper aka Captain Dapper
Email ThisBlogThis!Share to TwitterShare to FacebookShare to Pinterest