See Yourself in the Camo Trend: 11 Ways to Wear Camouflage 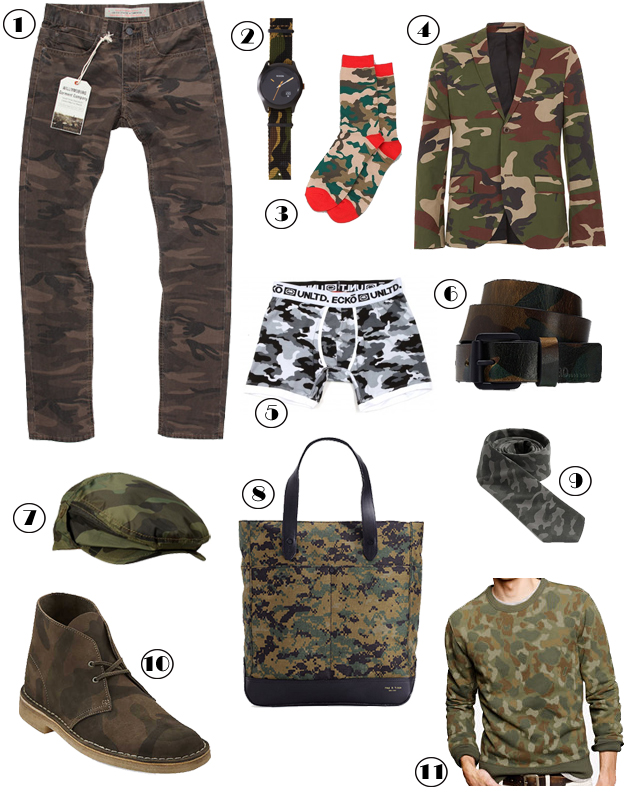 Forbes had named camouflage one of the Top 5 Men's Trends for Spring/Summer 2013. Details heralded it as one of The Top 7 Trends for Fall 2013. I recently included camo pants in one of my four ways to wear a corduroy blazer. I dare say camouflage as a trend isn't going anywhere. Some would say it's timeless even. The designs and the cuts may change, but camouflage will always wear well.

There are many, many ways to incorporate camo pieces into your wardrobe. You can fully embrace the look with camo pants or jacket. You can mix in smaller pieces, like a tie or a belt, if you're not ready to rock the full look. Or of course you could keep the trend all to yourself with camo boxers or socks.

Check out a few of my favorite pieces below.


How do you plan to use camo into your fall wardrobe? Is camo even on your radar for the season? Let me know how you feel about the camouflage trend in the comments below.

Images: Credited above.
Posted by Unknown at 8:00 AM Labels: dapper stuff, dapper style
Email ThisBlogThis!Share to TwitterShare to FacebookShare to Pinterest